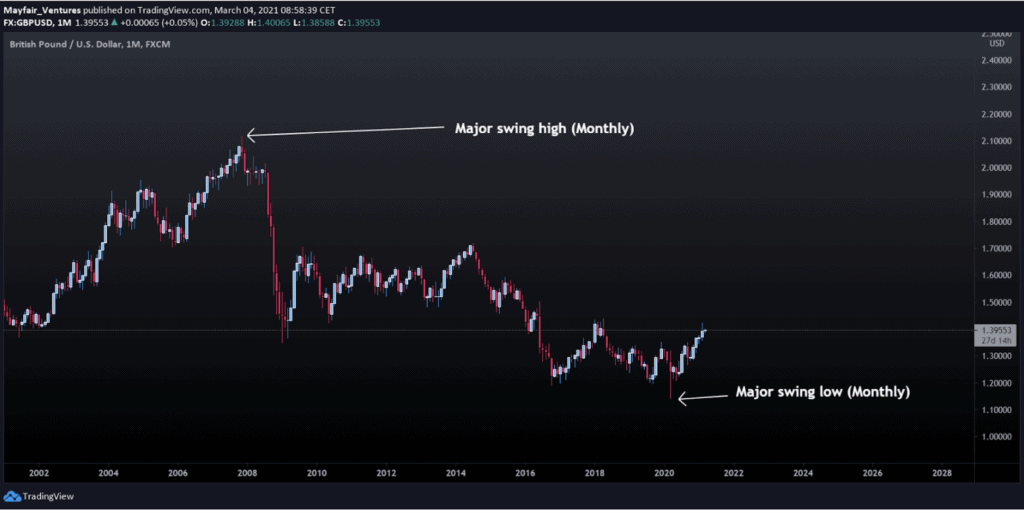 The Elliott Wave Principle posits that collective investor psychology, or crowd psychology, moves between optimism and pessimism in natural sequences. These mood swings create patterns evidenced in the price movements of markets at every degree of trend or time scale. (see linked idea below on this topic)

Background
Elliott Wave Theory is named after Ralph Nelson Elliott (28 July 1871 – 15 January 1948). He was an American accountant and author. Inspired by the Dow Theory and by observations found throughout nature, Elliott concluded that the movement of the stock market could be predicted by observing and identifying a repetitive pattern of waves.

Elliott was able to analyze markets in greater depth, identifying the specific characteristics of wave patterns and making detailed market predictions based on the patterns. Elliott based part his work on the Dow Theory, which also defines price movement in terms of waves, but Elliott discovered the fractal nature of market action. Elliott first published his theory of the market patterns in the book titled The Wave Principle in 1938. (source https://elliottwave-forecast.com/elliott…)

Why is it useful?
Some traders swear by this method. others like myself like the concept and use it as part of the strategy. For me personally, I use it for the monthly and weekly directional bias.

Smaller patterns can be identified within bigger patterns. In this sense, Elliott Waves are like a piece of broccoli, where the smaller piece, if broken off from the bigger piece, does, in fact, look like the big piece. This information (about smaller patterns fitting into bigger patterns), coupled with the Fibonacci relationships between the waves, offers the trader a level of anticipation and/or prediction when searching for and identifying trading opportunities with solid reward/risk ratios.

So where to start?
First, identify Major swing highs and lows – True Elliottitions will go back several years in the analysis to get an exact count. But for the purpose of this explanation, I have taken the monthly swing highs and lows to identify a starting point. This is good enough for how I utilize Elliott principles.

Once I have a starting point I am looking for a bias – Is this an impulsive or corrective move? This is what usually confuses people new to Elliott Theory, it can be very subjective. Hence constantly moving and re-plotting as price does what is expected – or completely against the trader’s expectations.

3 Rules
Most Elliott traders can agree – there are rules for every scenario, so in simple terms use these 3 rules as a starting point.

Corrective moves can be complex as you will see if you dig deeper into Elliott Wave – that there are several ways of “fitting” the patterns into the current scenario.

– this is just a simple example – more can be found on https://elliottwave-forecast.com/elliott…

A correct Elliott wave count must observe three rules:
Wave 2 never retraces more than 100% of wave 1.
Wave 3 cannot be the shortest of the three impulse waves, namely waves 1, 3 and 5.
Wave 4 does not overlap with the price territory of wave 1, except in the rare case of a diagonal triangle formation.

Wave 3 is an extension of 161.8% of the first wave in the Elliott wave count. This means that the third wave forms right after the completion of the second wave. To identify the 3rd wave, the second wave has to be complete and fall within the general rules of Elliott waves .

NEW VS OLD
The biggest change in today’s market compared to the one in 1930s is in the definition of a trend and counter-trend move. We have four major classes of market: Stock market, forex, commodities , and bonds. The Elliott Wave Theory was originally derived from the observation of the stock market (i.e. Dow Theory), but certain markets such as forex exhibit more of a ranging market.

In today’s market, 5 waves move still happen in the market, but our years of observation suggest that 3 waves move happens more frequently in the market than a 5 waves move. In addition, the market can keep moving in a corrective structure in the same direction. In other words, the market can trend in a corrective structure; it keeps moving in the sequence of 3 waves, getting a pullback, then continues in the same direction again in a 3 waves corrective move. Thus, we believe in today’s market, trends do not have to be in 5 waves and trends can unfold in 3 waves. It’s therefore important not to force everything in 5 waves when trying to find the trend and label the chart.

As I said on the front cover – this is not for experts, it’s an intro to Elliott Theory. If there are Elliott traders reading, please contribute to the post. Add anything you find useful.

The other post mentioned above was how the mindset plays into these waves and the overall moves.

Disclaimer
This idea does not constitute as financial advice. It is for educational purposes only, our principle trader has over 20 years’ experience in stocks, ETF’s, and Forex. Hence each trade setup might have different hold times, entry or exit conditions, and will vary from the post/idea shared here. You can use the information from this post to make your own trading plan for the instrument discussed. Trading carries a risk; a high percentage of retail traders lose money. Please keep this in mind when entering any trade. Stay safe.